The market for luxury vehicles in India is growing steadily

The German manufacturer Audi presented the luxury electric SUV e-Tron in India at the end of June. The electric vehicle with long-distance ability will be available from November 2019 for the equivalent of 215,000 US dollars. The Audi e-Tron will be manufactured in Brussels, Belgium, and imported to India as a fully assembled vehicle (completely built unit, CBU). It is Audi’s first electric-only model for the Indian market. At the moment the Audi e-Tron has no serious competitors, internationally the Tesla Model X comes close to it. Apart from the e-Tron, insiders expect the A8 and Q8 to be launched on the Indian market soon. Audi India already announced a price reduction for its A3 in June. This makes the compact sedan one of the most attractively priced luxury vehicles and Audi hopes to gain market share from the long-standing market leader Mercedes-Benz.

Volvo has plans for the assembly of hybrid and electric vehicles in India and plans to increase its market share in the luxury segment to 10 percent by 2020. Currently, models of the XC60, XC90 and S90 series are assembled on site in India and account for 60 percent of Volvo vehicles sold. According to Charles Frump, Managing Director of Volvo Car India, it is also possible that the third generation of the S60, which is to be presented in India in 2020, will be completely manufactured there. 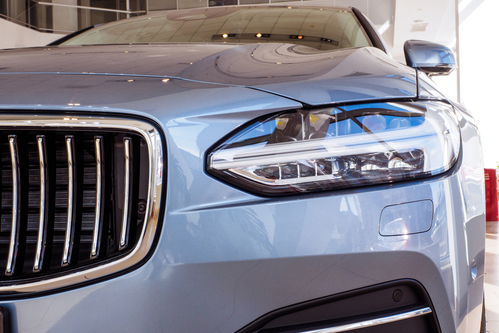 In May 2019, Jaguar Land Rover India introduced the locally produced Range Rover Velar. The SUV will be available in only one outfit and buyers will have the choice of petrol or diesel drive. In a press release, JLR India Managing Director Suri said that the production of the Velar in India has reduced costs by 15 to 20 percent compared to the imported model, and a competitive advantage can be gained in the luxury SUV segment. Other JLR models available in India include the Discovery, Evoque and Range Rover.

Last year BMW sold more than 10,000 vehicles in India for the first time. Together with the MINI brand, the company reported growth of 13 percent compared to 2017. In 2018, sales of vehicles from the MINI subsidiary even increased by an impressive 66 percent. The Italian sports car manufacturer Lamborghini sold 45 vehicles in India in 2018 and expects an increase of 60 percent in the current year.

Sales figures for two-wheelers in the premium segment exceeded the sum of 1 million units for the first time in the 2018 financial year. Renowned manufacturers such as Harley-Davidson and Suzuki are planning models for the Indian market, and newcomers such as the Chinese CF Moto and the Indian Revolt startup are confident about market developments. You are also a foreign automotive or supplier company and would like to export your products to India? Then, in most cases, a mandatory India certification according to the Automotive Industry Standard (AIS) is required. We will be happy to provide you with comprehensive advice on AIS certification for India.