The CCAP has Opened a Representative Office on the Premises of MPR China Certification GmbH in Frankfurt am Main, Germany

MPR China Certification GmbH, represented by the managing directors Julian Busch and Christoph Graffius, and MPR GmbH, represented by the managing director, Mrs. Xingshu Zhao, hosted the event. Among the guests were representatives of the test labs CSI as well as Dekra and representatives of well-known automotive suppliers such as Johnson Controls, Takata, Autoliv and ZKW. In total, more than 20 participants attended the opening and were able to participate in the lectures and discussions. After the official opening the further internationalization of the CCAP was celebrated with a feast.

MPR China Certification GmbH would like to thank the CCAP for the great honor and looks forward to further cooperation. 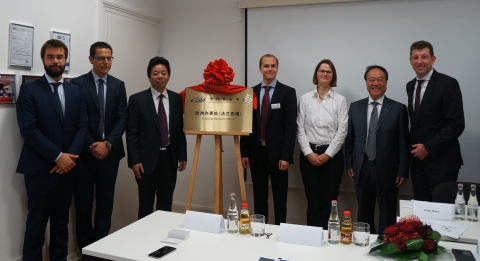 MPR China Certification GmbH offers CCC Certification for Automotive Suppliers and Manufacturers. For manufacturers we offer CCC certfiication and the Complete Type Approvals (including emission and fuel consumption test) to enable sales of vehicles into the Chinese market.

For more information regarding CCC certfiication, the certification process as well as the associated costs, please visit our website.

For detailed information, please download our free booklet “CCC Made Easy” here. You may also consider our book “A Brief Guide to CCC: China Compulsory Certification” which can be ordered directly on Amazon here.