Solid-state batteries are considered to be the next stage of development after lithium-ion batteries and an important future technology for upcoming e-cars. So far, however, solid-state batteries have only been produced in small series in the laboratory and not for a mass market. The fundamental difference with lithium-ion batteries is the replacement of the liquid electrolyte by a solid material. The advantages are a higher energy density and as a result a lower weight or more range and the elimination of the cooling system, which saves additional costs and weight. In addition, the solid-state technology is considered safer, as it cannot lead to fire or leakage of the electrolyte in accidents.

Although many automakers have already announced that they want to equip their vehicles with solid-state batteries, no manufacturer or supplier has succeeded in producing them in series production. In Europe, the current offensive in battery cell production is also based on solid-state technology. However, companies like LG Chem, Samsung SDI and SK Innovation are already exploring the battery technology of the future and VW is also involved with Californian technology company QuantumScape Corporation to develop solid batteries for its vehicles. 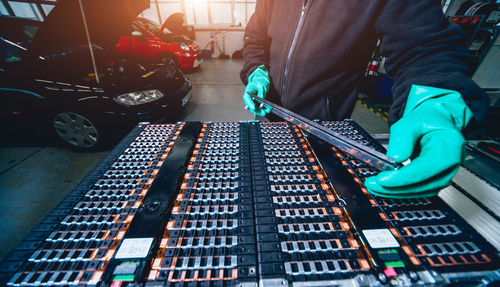 For the first time, information about solid-state batteries was published in a journal by a team from Tohoku University in Japan and Tokyo Tech. Now a Chinese start-up should have made the decisive breakthrough and started mass production of solid-state batteries. The young company was founded at the well-known University of Tshinghua and is called Qing Tao Energy Development. The research and development costs are estimated at more than 140 million euros, and a plant has been built in Kunshan, east of China, and has already been put into operation. The solid-state batteries produced by Qing Tao Energy Development have an energy density of 400 Wh / kg compared to conventional lithium-ion batteries with a maximum of 200 Wh / kg. The new plant has a production capacity of 100 MWh per year, which is sufficient only for 2,000 to 4,000 electrically driven vehicles. In comparison, Tesla’s Gigafactory comes to 20 gigawatt hours, but with conventional lithium-ion batteries. For this reason, Qing Tao Energy Development plans to increase its production volume by a factor of 7 by 2020. If you are already producing in China or considering an investment, remember that many industrial products must pass the mandatory CCC certification. We advise you and support you throughout the China CCC process.